During the FIFA meeting on 19 and 20 December 2008, it was confirmed that a bidding process for two World Cups is being held simultaneously. Interested countries will be invited to express their interest in the 2018 and / or 2022 World Cup.

The World Cup 2022 in Qatar will be compact and that has benefits for fans, FIFA and the environment. Due to the compact schedule, football fans do not have to travel far and often, saving money. All major facilities and host cities are located within a radius of 60 km. The environment is also less affected by this. Innovative technologies and advanced facilities will be built so that footballers and supporters can experience the 2022 World Cup in a cool environment. Qatar has proposed 7 host cities for the 2022 World Cup.

FIFA started 15 January 2009 with a 24-month bidding process to determine who the host countries are for the 2018 and 2022 World Cups. All members of FIFA have received an invitation urging them to express their interest in the organization .

In the invitation, FIFA emphasizes the impact of a World Cup. This tournament is in fact the largest sports tournament in the World. A World Cup evokes a lot of emotions in people and brings people from all over the World together. FIFA wants the great attention to the tournament to make a positive contribution to football. For the game. For the World.

On 2 February 2009, FIFA received 11 formal registrations for a bid for the organization of the 2018 and / or 2022 World Cup. Before the deadline of 2 February 2009, the following countries have shown their interest: Australia, Belgium and the Netherlands, England, Indonesia, Japan, South Korea, Mexico, Qatar, Russia, Spain and Portugal and the United States.

It is remarkable that so many major football countries have shown their interest in the organization of a World Football Cup. President Blatter said that our World is rich in natural beauty and cultural diversity, but also a World that fights for basic human rights and the daily reality of conflicts. Bringing the World together is a big responsibility for FIFA, with football as a symbol of hope and integration.

On February 16, 2009, FIFA will send the forms for registering the bid to all interested countries.

A total of 13 countries have shown their interest, including Belgium and the Netherlands together. The Bid Registration Forms for the organization of one or both football tournaments must be submitted by the deadline of March 16, 2009. The following countries have received Bid Registration Forms from FIFA: Australia, Belgium and the Netherlands, England, Indonesia, Japan, South Korea, Mexico , Qatar, Russia, Spain and Portugal and the United States. South Korea and Qater are only interested in the organization of the 2022 World Cup.

"We are honored by the fantastic number of interests in the World Cup, where every interested country actually wants to be a candidate. The diversity and quality of the candidates makes for a very interesting selection process. This shows that the World Cups are very important as a universal event with influence on the whole World. The World Cup must positively change the competition. For The Game. For the World. " said FIFA President Blatter.

The next step in the allocation process is in April 2009, when FIFA will send the Bid Agreements to the countries. These agreements contain the details and information about what candidates must include in their Bid Book. The deadline for countries to sign the Bid Agreements is December 11, 2009. The bidding countries receive rules and manuals to ensure that the correct documents are delivered. Countries must provide information about the infrastructure, relevant laws and regulations and the organization of the organization in general.

How did the registrations for the 2022 World Cup go?

All countries that are members of FIFA were allowed to apply for the organization of the 2018 World Cup and the 2022 World Cup, except for the countries of the continents where the last two World Cups have been held. This meant that countries from Africa and South America should not organize the 2022 World Cup. The procedure for applying was as follows:

Supervision of the FIFA Ethics Committee

The ethics committee of FIFA met on Monday 15 March 2010 under the chairmanship of the Swiss Claudio Sulser. Sulser has recently been appointed as the new chairman of this committee. During this meeting, the progress of the bidding process for the organization of the 2022 World Cup was assessed. The bidding process is based on the principles of transparency and equality.

FIFA President Joseph Blatter opened the meeting and emphasized the importance of the committee: "Football is more than a game. In its socio-cultural approach, football is hope, it accommodates emotions and it is the school of life. Football is also very important for the economy. All this brings not only social responsibility, but also moral dedication. Partly for this reason, it is important to have an independent ethics committee that complies with fair play and the Code of Ethics. "

Chairman Sulser said: "As a former professional football player, I am very honored to be the chairman of this committee. I am sure that we will deliver positive work as a team, with a transparent approach and with the Code of Ethics in mind to protect the integrity of football. "

The committee has decided to send a letter to all bidders at the 2022 World Cup to remind them that they have signed for a World Football Cup with respect for fair play. The ethics committee will continue to assess whether all rules concerning the bid and the allocation go well.

Visit of the FIFA inspection group to Qatar

The FIFA inspection group visited Qatar on September 17, 2010. The visit to Qatar is the ninth and final visit to the bidding countries at the organization of the 2018 World Cup and / or the 2022 World Cup. Qatar was together with Australia, Japan and South Korea one of the four candidates for the exclusive right to organize the 2022 World Cup.

The six-member FIFA company spent three days in Qatar under the direction of Harold Mayne-Nicholls. The group visited the Aspire Dome and the Al Sadd stadium. They also watched a football match in a stadium with full climate control. In addition, the FIFA delegation was introduced to members of the Royal House of Qatar and members of the government.

From an organizational perspective, Qatar has the potential to be the host country for an international sporting event, such as the World Football Cup in 2022. According to Mayne-Nicholls, there are a number of logistical challenges. According to the FIFA evaluation report, Qatar has the highest operational risks of all bidding countries.

Qatar has tried to include all aspects in their bid: from green technologies to infrastructure to the major impact that the 2022 World Cup is leaving behind in Qatar. The chairman of the bid has promised that Qatar will be ready in 2022 to organize the World Cup.

FIFA has 24 members on the executive committee. The process is based on the principle of transparency, objectivity and equivalence. The 24 members can cast one vote each, but just before the voting round, two members were suspended on suspicion of corruption and conspiracy. These two members would like to sell their vote.

The other 22 members voted first on the organization of the 2018 World Cup and then on the 2022 World Cup. The vote is strictly secret and a majority of votes is needed for the allocation. If no country has a majority of the votes, the country with the least votes will drop out, after which a new round of voting will be held. If two or more countries have the least number of votes, the country that votes will be voted on.

The organizing countries had to meet conditions regarding the football stadiums. Below is an overview of the construction costs and the number of stadiums per country:

In the first round of voting, the countries received the following number of votes:

Since no country has a majority of the votes, Australia dropped out and a second round of voting was held.

As no country has a majority of the votes, Japan dropped out and a third round of voting was held.

Since no country has a majority of the votes, South Korea dropped out and a fourth round of voting was held.

Qatar received the most votes in the last round of voting and can therefore organize the World Cup in 2022.

Qatar has been elected organizer of the 2022 World Cup. FIFA President Josept Blatter announced the results of the voting rounds in Zurich on 2 December 2010. Members of the FIFA Executive Committee were allowed to vote in various countries. FIFA is proud that in 2022 the World Football Cup will come to a new country and even a new continent. Blatter indicated that this is a new step in the development of football.

Later, Blatter praised the countries that had just missed the organization. He gave a big compliment to all bidding countries for the great work they have done and for the positive message they were sending. All countries have understood that football is more than just a game. Football is not just about winning, it is the school of life where you have to learn to lose.

In addition to the Netherlands and Belgium, England, Spain and Portugal, Australia, South Korea, Japan, US and Russia were also in the race for organizing the 2022 World Cup. The US (1994), Japan and South Korea (2002) organized the World Cup.

Sheikh Mohammed bin Hamad Al-Thanix said that he is very honored to be able to organize the 2022 World Cup in Qatar. He said that Qatar will meet all high expectations. "Thank you for believing in change, for expanding the game and for giving Qatar a chance. You will be proud of us and the entire Middle East."

The announcement of the host country of the 2022 World Cup is one of the largest media events in Switzerland. More than 70 TV stations with 1,000 reporters were present to report live at the Zurich Exhibition Center. The agreements for the organization by Qatar were signed on December 16, 2010 by Blatter and Khalifa Al-Thani. 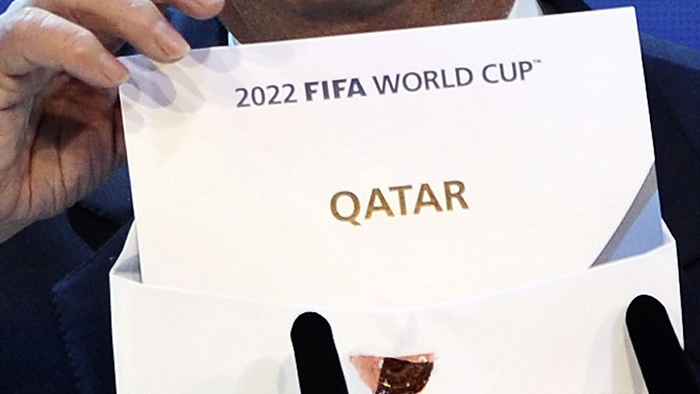 Qatar has been awarded the 2022 World Cup by a majority of votes in the ballots. It turned out afterwards that there was corruption by FIFA in the bidding process.

About the author of 'World Cup 2022 allocation - why did FIFA choose Qatar?'