Qatar has proposed 7 host cities for the 2022 World Cup to FIFA. The transport options during the 2022 World Cup will deviate from the usual options of a World Cup, because all playing cities are located at a relatively small distance from each other.

The World Football Cup will be played in 2022 in the following 7 cities:

Major plans have been made for the New Doha International Airport and the overall infrastructure. This airport will become the most important airport during the 2022 World Cup. Nevertheless, the fact that 10 of the 12 playing cities are within a radius of 30 km can lead to problems. If logistical and operational problems arise, almost the entire tournament will be hit immediately. It is therefore important that the infrastructure is ready well before the start of the 2022 World Cup.

Qatar has proposed 8 stadiums for the 2022 World Cup. 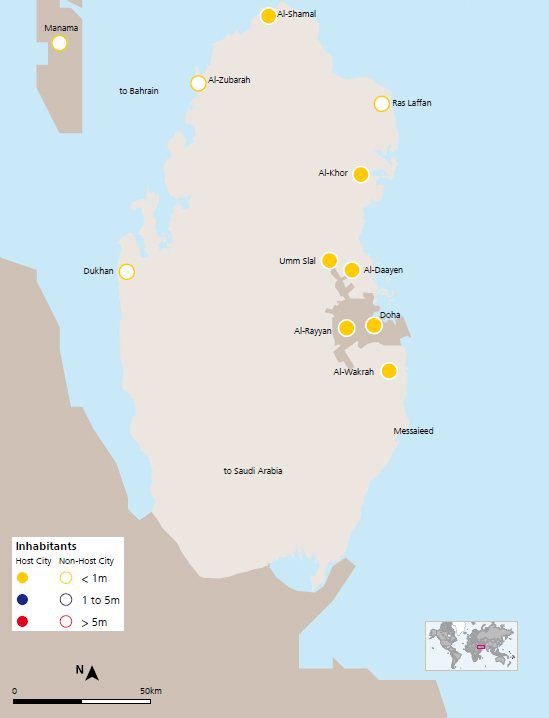 Distances between host cities in Qatar

The distances between the host cities in Qatar are very small. The greatest distance is between Al-Wakrah and Al-Shamal, namely 128 kilometers. Al-Khor is then the furthest away from the capital. The other host cities are located within a radius of 30 km from Doha.

Play city Doha is located on the east coast of Qatar. Doha is the capital of the host country, and is named after the Arabic term 'dohat' (curves). This refers to the round bays along the coast.

The city has a very commercial center with modern buildings, government departments, ministries and an international airport.

Doha combines modern civilization with ancient traditions. There are many old buildings, towers and fortresses. In addition, the infrastructure is of high quality and there are huge office buildings in the city center.

Doha has hosted several international sporting events in recent years. In 2006 it hosted the Asia Games, after which the AFC Asia Cup was held in 2011. The city has many good sports facilities, including six World Cup training venues.

Play city Al Wakrah is one of the largest and oldest cities in Qatar. The city has existed since 1828 and is located on the southeast coast of the host country, about 17 km from the capital Doha.

Al Wakrah has vast sandy beaches and beautiful historic sites, forts and buildings. The local museum is about the rich history of nature, art and architecture.

In the past there was a lot of fishing in the waters off Al Wakrah. There was also a lot of trading in pearls. The design of the Al Janoub Stadium is inspired by the boats used by the original inhabitants.

Al Wakrah Sports Club is one of the oldest football clubs in Qatar. The association was founded 60 years ago and has already won the national title twice.

Play city Al Khor is located on the east coast of Qatar, 60 km from the capital. Al Khor means 'bay', as the city is located on a 3km long cove. The city is one of the oldest in Qatar and was inhabited in the 18th century by the Al Muhannadi tribe.

Like the other coastal cities of the host country, Al Khor is also known for its fishing industry and pearl trade. The history of the city can be seen in the Archaeological Museum, which showcases treasures from the underwater world.

The design of the Al Bayt Stadium is based on the bayt al sha'ar. This is the traditional tent in which the former inhabitants lived.

How many host cities are there during the 2022 World Cup in Qatar?

There are 7 host cities during the 2022 World Cup in Qatar. The cities are relatively small distance from each other.

What are the host cities of the 2022 World Cup?

The host cities of the 2022 World Cup in Qatar are:

All information about the 2022 Qatar World Cup: host cities. What do the cities have to offer to the Dutch national team and the fans?