The 2022 World Cup mascot is called La'eeb and was presented by FIFA and Qatar on Friday, April 1, 2022. This is the official mascot for the FIFA World Cup.

The name La'eeb means something like 'super skilled player', so a football player who is very good at his craft. This mascot invites everyone to believe in themselves. La'eeb will bring the joy of football to everyone. []

The adventurous, cheerful and curious mascot was unveiled during the draw in Doha. La'eeb was welcomed by the organization's marketing director. According to him, La'eeb comes from a place that is indescribable and everyone can imagine for themselves what they see in the mascot.

The organization is sure that football fans will love this cheerful and playful mascot. La'eeb plays an important role in the young supporters' World Cup experience.

According to the story, the World Cup mascot comes from a parallel universe, where all the mascots live. It is a world where ideas and creativity form the basis for the characters that live in everyone's minds.

Screensavers, stickers and gifs of the 2022 World Cup mascot will be posted on all social channels of the tournament. La'eeb will be everywhere throughout the game schedule from November 21 to December 18. []

All the mascots of the World Cup football 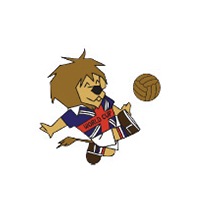 Description: Willy is the first mascot of the World Cup. This mascot is a lion, which comes from the national symbol of England. The t-shirt features the flag of the United Kingdom, as well as the words 'World Cup'. 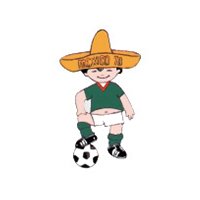 Description: Juanito is a Mexican boy with a big sombrero on his head. It is immediately noticeable that this World Cup is being held in Mexico. This is also apparent from the text on the sombrero. Juanito means 'little Juan'. Juan is a name that is very common in Mexico. The clothing is the same as the clothing of the Mexican national team. 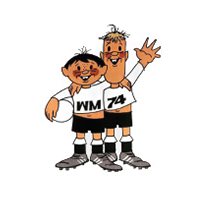 Description: Tip and Tap are the mascots of the World Cup in Germany. The boys also wear clothes from the German national team. The letters 'WM' on Tip's t-shirt stand for 'Weltmeisterschaft', which means world championship. The numbers '74' on Tap's t-shirt represent the year 1974. 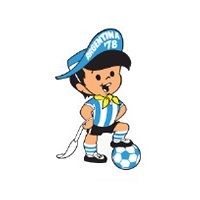 Description: Gauchito wears the clothes of the Argentina national team. He also has a ball with him, just like all previous mascots. The hat reads 'Argentina '78'. Gauchito means 'little gaucho'. A gaucho is a descendant of the Spanish rulers who lived in Mexico in the past. The whip and his handkerchief are traditional features of a gaucho. 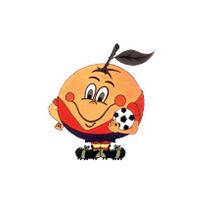 Description: Naranjito is an orange, a typical Spanish fruit. The mascot thus refers to the organizing country Spain. Naranja also means orange. The addition '-ito' is a diminutive, meaning the mascot means 'little orange'. Naranjito wears the clothes of the Spanish national team. He has a big smile because of the fun in football sport. 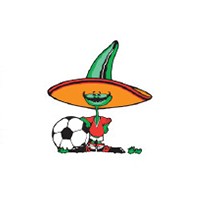 Description: Senor Pique is a typical Mexican fruit, namely a jalapeno chili pepper. The name Pique refers to the Mexican word 'picante', which means spicy or pungent. Senor Pique has a big Mexican hat on. This hat, together with the big mustache, suits the typical Mexican men. 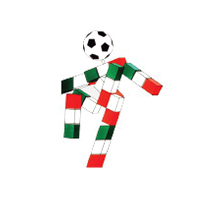 Description: The previous mascots were all an animal. The mascot of the World Cup in Italy, on the other hand, is a wooden type, made of slats or stones. Each of Ciao's limbs has the three colors of the Italian flag, namely green, white and red. Ciao's head is a soccer ball. The name Ciao means a greeting, something like 'hello'. 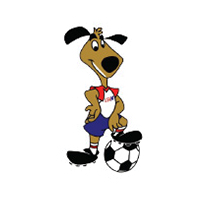 Description: The mascot of the US is again an animal. Striker is a dog and was chosen by the Americans as the mascot for the World Cup. The dog is the most commonly kept animal and is a symbol of solidarity. Warner Bros. designed this mascot. Striker wears clothing in the colors of the American flag, namely red, white and blue. The t-shirt reads 'USA '94'. 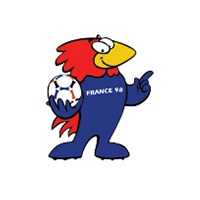 Description: The mascot of France is also an animal. In this case, Footix is a rooster, the national symbol. Footix is dark blue, as are the colors of the French national team. The name Footix consists of two parts: 'Foot' and the suffix '-ix'. 'Foot' is a reference to football. '-ix' is a reference to Asterix, a French cartoon character. 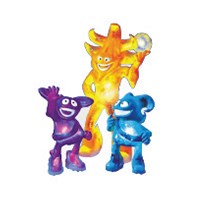 Description: Until now, the World Cup mascots were drawn as a cartoon character. Kaz, Ato and Nik are computer-drawn as figures from the future. The three mascots play 'Atmoball'. This is an imaginary future sport that resembles football. Kaz and Nik are players of a team, of which Ato is the coach. The three names were chosen by the people of South Korea and Japan. Voting was possible via the internet and at McDonald's. McDonald's was the main sponsor of the 2002 World Cup and received extra publicity in this way. 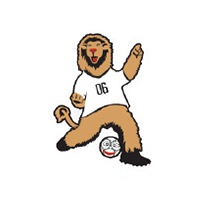 Description: Goleo VI looks like one mascot, but in reality there are two. Goleo is the lion and the ball is called Pille. Goleo VI was designed by Jim Henson Studios who are known for the Muppets. The choice of a lion as a mascot did not go down well with all Germans, because the national symbol is originally the eagle. 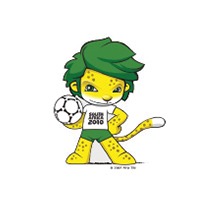 Description: The mascot of South Africa is a leopard. This animal is common in South Africa. The name Zakumi consists of two parts: 'Za' and 'Kumi'. 'Za' refers to 'South Africa' and 'Kumi' stands for the number ten. Zakumi represents the people, geography and spirit of South Africa, making him the emblem of the World Cup. 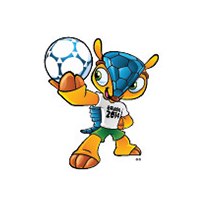 Description: Fuleco is Brazil's mascot for the 2014 World Cup. The name Fuleco consists of two parts: 'futebol' and 'ecologia'. This gives the name of the mascot a political touch, namely that people with a passion for football should also think of the environment and nature. This is also reflected in the fact that Fuleco is an armadillo. This animal is in danger of extinction in Brazil. This mascot was also chosen by the inhabitants of Brazil. 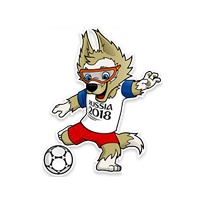 Description: The mascot of Russia is a wolf. This mascot exudes fun and confidence and is very charming. The name Zabivaka in Russian means something like 'the one who scores'. The wolf was elected by the Russian people with 53% of the vote. While playing football, the mascot wears sports glasses, which he believes give him special powers on the field. 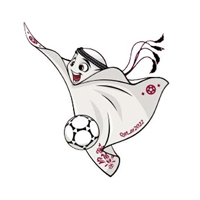 Description: La'eeb is the mascot of the World Cup in Qatar. This mascot is a kind of cloth that invites everyone to believe in themselves. The name means 'super skilled player' in Arabic. La'eeb comes from a parallel world where all the World Cup mascots live.